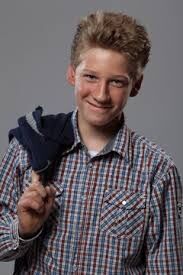 Johannes Hallervorden (* 1998 in Lannion in France ) is a German actor . He is the son of Dieter Hallervorden and Elena flower.

His first stage appearance was in 2012 in Berlin Hallervorden Schlossparktheater , had taken over his father Dieter Hallervorden 2009. He made ​​his television debut in 2012 with a guest role in an episode of ZDF -Kinderserie Terra MaX .

Since 2013 he plays the lead role as spirit "of Melchior and Panke" in the Disney Channel Germany produced television series Binny and the spirit .

Community content is available under CC-BY-SA unless otherwise noted.
Advertisement